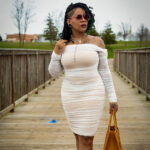 Born and raised in Valdosta, Georgia, Angela is not only a popular talk show host, culture connector and keynote speaker, but also a thriving entrepreneur, also dubbed as the “Small Business Whisperer”. A small business herself, she considers small businesses to be “Game Changers” and the heartbeat of America. It is through this passion, that she continues her relentless pursuit of knowledge to help them thrive.

It’s with much appreciation and excitement that we welcome Angela Ward as a member of the Black Media Honors Board of Directors as the Director of Strategic Partnerships & Activations. Angela carries an extensive background in marketing and sponsorship procurement, as well as media relations. As we press forward and grow we look forward to working together.